How Does The Brain Become Addicted?

The Role of Dopamine and Serotonin

Dopamine and Serotonin in the Body 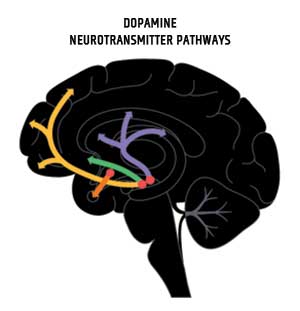 Dopamine and serotonin are neurotransmitters, chemical signals released within the brain that communicate specific messages throughout the body.

Dopamine is released within the hypothalamus and received and processed by the basal ganglia, all located in the limbic system. This neurotransmitter communicates feelings of happiness and bonding.

Its effects on the basal ganglia, amygdala, and prefrontal cortex are so powerful that it encourages the person to repeat the activity that generated the dopamine. As a result, this chemical signal impacts a number of essential activities, from reproduction to mother/child bonding.

Serotonin is released within the GI tract and the brainstem. This powerful chemical plays a number of important roles within the body, but it primarily aids in digestion and regulating mood. Here are some of the other functions it fulfills: 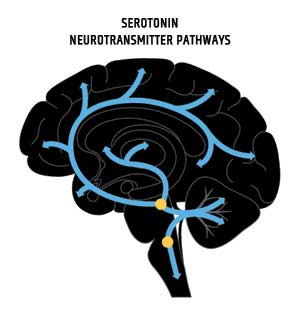 There are many natural activities that encourage the release of these neurotransmitters. For example, dopamine and serotonin are released during sex, exercise, sunbathing, massages, and a whole range of other pleasurable activities. Even the smell of a good meal cooking can release neurotransmitters associated with pleasure.

Dopamine and Serotonin From Drugs and Alcohol

Artificial sources of dopamine and serotonin are addictive substances, such as drugs and alcohol. In fact, the powerful impact these chemicals have on neurotransmitters plays a central role in the addiction of the brain.

Most addictive substances release intense amounts of both dopamine and serotonin into the brain of the user. Some drugs can release up to 10 times more dopamine than is released even during some of the most pleasurable natural activities, including sex.

This flood of neurotransmitters provides users with an intense experience of happiness and pleasure that triggers the reward center of their brains, encouraging them to use the addictive substance again and reinforces continued use despite any negative consequences.

The Spiral of Addiction

The release of dopamine and serotonin that results from drug use contributes to a spiral of addiction that moves the user from trying a substance once or twice to becoming completely dependent upon the substance for any sense of emotional pleasure.

At first, the drugs or alcohol deliver such an overpowering feeling of well-being and happiness that, over time, it becomes very difficult for any other activity to measure up. In fact, the addictive substance may become the person's go-to for handling any type of setback, stress, or negative emotion, because it is the one thing that is sure to deliver a strong positive experience. 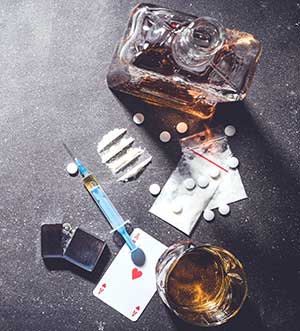 In addition, as an individual consumes these substances over time, the brain begins to produce lower levels of its own dopamine and serotonin. The brain's receptors also lose their sensitivity to these neurotransmitters. The amygdala shrinks, and the amygdala and the prefrontal cortex begin to deliver strong feelings of stress anytime the addictive substance is not in the body.

The person then begins to experience withdrawal-intensely negative physical and emotional side effects, including depression and anxiety-anytime they are not actively using. This is a phenomenon known as dependence.

The brain's loss of sensitivity to dopamine and serotonin (and other neurotransmitters, depending upon the drug used) means that the person with an addiction requires more and more of their preferred substance in order to achieve the level of pleasure that they have come to expect. This is known as tolerance, which requires escalation of the substance use and results in its abuse.

As a result of dependence and tolerance, the person begins using drugs and alcohol more frequently and in greater amounts. The more they use, the greater the effect on the brain. Soon, the individual is trapped in a spiral of addiction that can come to dominate their life, thoughts, and behaviors.

Why are drugs addictive but other natural reward systems are not? 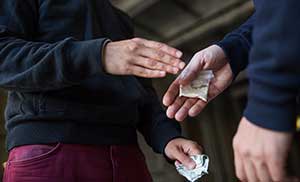 The brain's reward system, the process by which dopamine and serotonin are utilized to encourage certain behaviors, is a natural and healthy system that ensures the performance of essential activities (such as reproduction). Many types of activities can activate this reward system without creating the dependence that drugs and alcohol do. Why?

One answer is in the intensity of the "high" produced by substances. By releasing significantly higher amounts of certain neurotransmitters, drugs and alcohol generate an abnormally strong response from the brain's reward center. As this system is activated over and over again, the brain becomes programmed to focus only on that which delivers such an intensely pleasurable experience: the drugs and alcohol. Since no other activity can replicate this experience, the individual begins to put aside everything else but the need for their preferred substance.

A second reason why substances are addictive but natural reward systems are not is that they physically change the structure of the brain. Eating a cookie, having sex, or watching a sunset utilize the reward center of the brain but without changing its structure.

There is no doubt that drugs and alcohol have major impacts on the brain. Receptors lose their sensitivity. The amygdala shrinks. The brain produces less dopamine. Even the person's decision-making center, the prefrontal cortex, is affected, reducing their ability to control impulses, reason, and exercise good judgment. 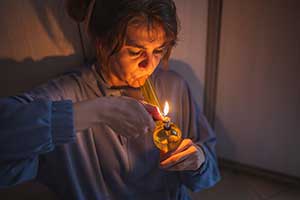 As a result, the only way for the brain to activate its reward system in a way that is pleasurable, or even anything less than depressing, is to obtain the flood of dopamine and serotonin the addictive substance delivers.

Thanks to the addiction occurring within the brain's own circuitry, patients usually require intense professional support to overcome their physical and psychological dependence to restore the brain's natural reward system.

Self-control alone is not sufficient for managing addiction, just as it is not enough to manage obesity. The physical changes underlying the disease must be addressed professionally.

Thus, the services provided by skilled drug and alcohol treatment centers are critical in giving people a chance to reclaim a normal life by retraining their brains and teaching them how to manage their disease.