How Do Addictive Substances Affect the Brain?

The human brain weighs approximately three pounds, but its role in human life is much heavier. As the most complex human organ, the brain has fascinated scientists for thousands of years, as they have sought to understand the role it plays in driving human thought and behavior. When it comes to addiction, understanding the impact of drugs and alcohol on the brain, and the potentially lifelong effects of these substances on this vital organ, is essential in understanding what addiction is and how it impacts the addicted.

The Human Brain: An Overview

The brain, in many ways, is like a compact computer for the human body. The brain processes information and communicates with the body at rapid speeds. Its high complexity surpasses the abilities of any ordinary computer and is the central hub for almost every bodily function, idea, emotion, and action. 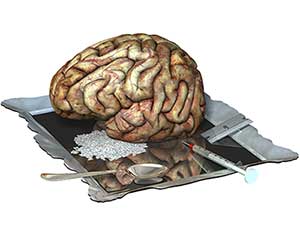 The brain is omposed of 60% fat and 40% water, protein, carbohydrates, and salt,, it contains an intricate pathway of blood vessels and nerves that serve as the roadways through which information travels as the brain and the body communicate with each other.

To maximize surface area for neurons - the nerve cells that communicate information throughout the body and within the brain - the brain is covered with folds, bumps, and grooves that produce a wrinkled appearance. This increased surface area has space for more than 86 billion neurons. The result? A tiny organ capable of enough processing power to handle the 11 million bits of information that the body sends to it every second.

In addition to grooves and bumps, the brain also contains gray and white matter: the darker, outer layer of the brain called the cerebral cortex, and the lighter, inner portion of the brain. The gray matter consists of the neuron ends, or cells, while the white matter consists of the neuron stems. At its most basic, gray matter is responsible for processing the information that comes in from the body, while the white matter is responsible for communicating with the body in response to the data received.

Sections of the Brain

All the brain's pathways, neurons, and processing power are organized into several main sections: The cerebrum, the cerebellum, the limbic system, and the brain stem. Each of these sections controls specific functions, together creating an entire thinking, feeling human being.

The largest section of the brain, the cerebrum, is divided into left and right hemispheres that are connected by a bundle of nerves called the corpus callosum. Each hemisphere is divided into six lobes that separately control various functions. The cerebrum is responsible for a wide range of tasks, including the following: 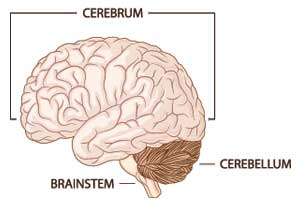 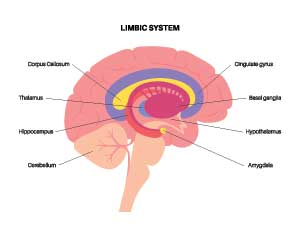 Like the cerebrum, the cerebellum is divided into two hemispheres. The cerebellum may only be the size of a fist, but it plays a vital role in the functioning of the body. Its roles include the following:

Located at the base of the brain, the brainstem is the link between the cerebrum and the spinal cord. This part of the brain coordinates information among the different parts of the brain and the brain stem. In addition, it is responsible for the following:

Together, the brain and the spinal cord serve as the body's central nervous system, sending and receiving signals from the nerves throughout the rest of the body. The brain uses those signals to process information, control the rest of the body, and respond logically and emotionally to the information it receives.

What areas of the brain do drugs and alcohol affect?

Because the brain is central to every single thought, emotion, and action, anything that impacts the brain can impact an individual's life. The impact of drugs and alcohol can be particularly profound, especially when taken over a long period of time. 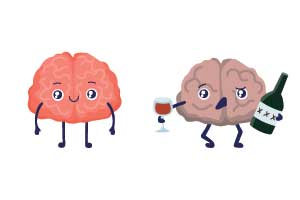 Almost all addictive substances have their greatest impact on the release of dopamine. Dopamine regulation occurs in the limbic system of the brain. The hypothalamus releases the dopamine, while the basal ganglia receives the dopamine and assists in its processing.

Dopamine is a neurotransmitter or chemical signal, that communicates happiness to the individual. When released, it not only allows a person to experience a sensation of happiness, but it also interacts with the brain in such a way as to encourage the individual to repeat the behavior that created happiness.

Dopamine has other important functions as well. This neurotransmitter helps to regulate motor control. Its ability to reward certain activity with feelings of happiness and pleasure make it central in critical activities such as mother/child bonding, reproduction, and motivation.

In addition, drugs and alcohol can influence the other portions of the brain responsible for processing the effects of dopamine: The amygdala and the prefrontal cortex. These changes can make it harder for individuals to stop taking addictive substances because these changes increase the stress a person feels when they are not taking their addictive substance of choice.

Finally, drugs can influence other areas of the brain by how they interact with the body's natural communication systems. For example, heroin and prescription opioids mimic the neurotransmitter endorphin, which can relieve stress and block pain, while marijuana imitates anandamide, a neurotransmitter used in the hippocampus to affect memory formation and focus. 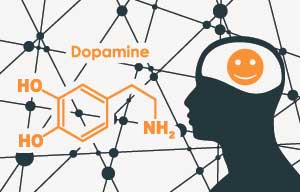 By stimulating the nerve receptors, these drugs create strong reactions within the brain. Because these drugs are not the same as the natural neurotransmitters, however, their effects can be more extreme, or more erratic, than those caused by the natural substance. The results are changes within the brain that significantly alter the person's thoughts, emotions, and behaviors.

What are the short and long-term effects of drugs and alcohol on the brain?

Drugs and alcohol have a variety of short and long-term effects on the brain that can influence the person's behavior. Behavior, health and wellbeing changes occur both while they are under the influence of the addictive substance and even after the substance leaves their system.

The short-term impacts of drugs and alcohol depend upon the specific substance used and how it impacts the brain. For example, the influence of marijuana changes how a person thinks, learns, and performs certain complex activities. The influence of heroin, on the other hand, creates a surge of pleasure followed by drowsiness and changes in the automatic functions of the body (such as breathing). Some of the most common symptoms of various addictive substances include:

The short-term impacts of drugs and alcohol depend upon the specific substance used and how it impacts the brain. For example, the influence of marijuana changes how a person thinks, learns, and performs certain complex activities. The influence of heroin, on the other hand, creates a surge of pleasure followed by drowsiness and changes in the automatic functions of the body (such as breathing). Some of the most common symptoms of various addictive substances include:

Not only do addictive substances lead to a larger-than-normal release of dopamine in the brain, over time, they train the brain to release less of its own dopamine. As the brain receives enormous amounts of dopamine from the addictive substance, it stops producing as much dopamine of its own. The result is that those suffering from addiction may feel that ordinary activities are less enjoyable than they used to be. In addition, the brain's receptors become less sensitive to dopamine, requiring higher and higher amounts to deliver the same pleasurable experience. Therefore addicts often need to take more and more of the addictive substance as their addiction progresses.

Addictive substances also alter the amygdala and the prefrontal cortex. As a result, these portions of the brain deliver high levels of stress when the addictive substance is not in the person's body.

Increased stress levels along with reduced feelings of pleasure can be extremely distressing to persons suffering from addiction. They create the symptoms of withdrawal that can make it very difficult for addicts to stop taking addictive substances, creating the conditions that reward addicts physically for continuing their addiction. 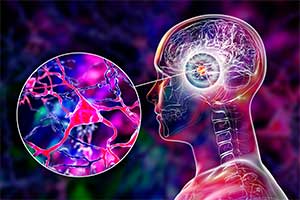 Drugs and alcohol, when taken over long periods of time, can also lead to deterioration in certain parts of the brain resulting in long-term effects on a person's ability to think and act appropriately. Here are some of the biggest changes that occur in the brain and behavior over sustained drug and alcohol abuse:

More serious brain injury caused by the death of cells within the brain can also occur because of the consistent use of drugs and alcohol. Brain injury most often occurs during an overdose of an addictive substance. Overdose can starve the brain of oxygen, leading to permanent problems within the brain. In the worst-case scenarios, overdose can lead to death.

Drugs and alcohol have a powerful effect on the body's most powerful organ: the brain. Consistently taking these substances can lead not only to short-term changes in the brain and behavior but long-term problems and even death. That is why addiction treatment is so important. Overcoming addiction by willpower alone can be almost impossible considering the powerful physical changes that occurs within the brain of a person suffering from addiction. Addiction treatment helps to address the underlying physical and cognitive effects of addiction, giving people seeking treatment a greater ability to stop using addictive substances, address the underlying drivers of their addiction, and return to a healthy life.