Is It Difficult To Stop Using Once The Brain Is Addicted?

Addiction can be difficult to overcome without the right treatment. Even patients who go through treatment for substance use experience a relapse rate of up to 85% in the first year after treatment. This does not mean that recovery is impossible, addiction is treatable, and many individuals with addiction to substances eventually achieve a lasting recovery. What it does indicate is that stopping the consumption of drugs and alcohol is more difficult, and more complicated, than just making the mental decision to quit.

A common misperception about addiction is that using substances is a sign of moral weakness and that stopping is simply a matter of exercising sufficient self-control. If the person is using, so this line of thinking goes, it is because they lack the moral strength or willpower to simply stop.

The reality, however, is that addiction has about as much to do with willpower as type 2 diabetes or hypertension. That is, while willpower plays a role (e.g., making healthy diet choices to manage diabetes), the approach to treating the disease needs to go deeper than simply expecting the individual to begin making better choices.

Addiction goes beyond willpower because its action is rooted in the reward system of the brain ( that delivers pleasurable feelings in response to specific activities). Addiction rewires this process by overstimulating its circuits, causing the brain to become less sensitive so that it requires the presence of drugs and/or alcohol to achieve that same feeling. Thus, the natural pleasures found in everyday life can no longer be enjoyed. 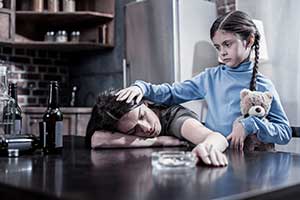 In addition, addiction alters size and function in other areas of the brain that react to stress, including the amygdala and the prefrontal cortex. In response to these changes, neurochemicals are programmed to create feelings of stress, depression, and anxiety whenever drugs and/or alcohol are not present, causing the person to seek the substance again for relief. Often, a person's ability to exercise good judgment and self-control is also compromised.

These physical changes and functional differences can be mapped on a MRI. For example, one study used functional MRI to show reduced activity in areas of the brain used for self-control, the prefrontal cortex. Imaging revealed much less activity in the brain's reward center of individuals who use methamphetamine while they were actively in addiction than after 18 months of abstinence.

Thanks to these physical, mappable changes in the brain's structure, addiction can be classified as a disease, not a moral failing. And treatment modalities need to address the damage done to the brain instead of simply requiring the individual to exercise greater willpower.

Peer and Social Aspects of Addiction

Addiction's impacts on a person's relationships are well-documented. Not only does their addiction create huge emotional and financial burdens on their families, but it can also lead to isolation as they abandon normal social relationships in favor of pursuing their drug and alcohol use. In addition, many people in their lives, including children and romantic partners, choose not to remain in the relationship once the person's addiction leads to negative behaviors, such as the spending of the family's finances or violent outbursts

If a drug user has a romantic partner or friend who is also a drug user, being around that partner can create physical and psychological urges to use.

Peer and social aspects can also play a role in encouraging a person into addiction, even keeping them in their addictive cycle. For example, individuals who feel isolated sometimes begin taking drugs and alcohol as a way to manage their loneliness or to earn acceptance from social groups they desire to be a part of. 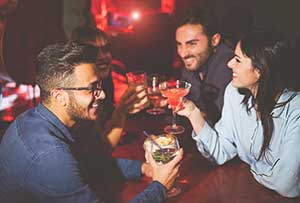 Similarly, close friends and even acquaintances can encourage someone to try the drugs and alcohol they themselves use. For example, an individual may try substances at a party in an attempt to fit in with their friends who are using them.

Once begun, the spiral of addiction can quickly drag individuals into a disease from which they struggle to leave. In addition, social and peer relationships can become strong cues that encourage a person to use. The forces involved act in much the same way that the smell of a baking cookie draws a person in to stop and eat one. The brain associates the sensory cue with a release of dopamine and the resulting pleasurable experience. The same responses to social cues can occur with relationships to stimulate and enhance drug-seeking behavior.

For example, if a person who uses drugs has a romantic partner who also uses, the behavior is reinforced through that relationship. Thus being around or even thinking about that partner can create powerful physical and psychological urges to use.

That partner becomes part of the connection in the addict's brain to the pleasurable release of dopamine that comes from drugs and alcohol. Due to this strong association, after treatment, patients often have to leave their previous friend circles and find new social connections that do not involve drugs and alcohol. The brain's cues must be rewired or avoided in recovery to give the individual a chance at successfully pursuing sobriety.

Another aspect of addiction that makes it hard for those using substances to quit is the relentless cravings that they experience when they are not using. Once addiction takes hold of the brain, it reinforces the need to continually seek the dopamine rewards that come from usingâ''rewards that can be as much as 10 times greater than that delivered by other, naturally dopamine-inducing activities, such as exercise. 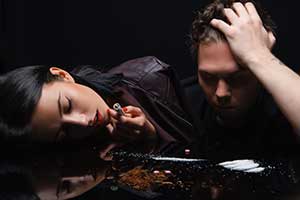 These cravings come from two primary changes within the brain. First, the brain begins to produce less dopamine of its own in response to the flood of dopamine delivered by substances . This makes everyday activities less rewarding, requiring the individual to seek dopamine input from drugs and alcohol.

Second, the brain's receptors become less sensitive to dopamine. As a result, the person requires more and more dopamine to get the same feeling they had the first time they used. This is a phenomenon known as tolerance, and it drives the individual to ingest larger amounts of the addictive substance and more frequently as their addiction progresses.

Together, these two changes create an almost constant desire for the addictive substance. Without a steady input of drugs and/or alcohol, the person with substance use disorder not only fails to get that "high" they actively pursue, but they may have trouble feeling anything other than depression and anxiety. Their craving becomes less about feeling pleasure and more about feeling normalâ''and the drugs or alcohol are key to obtaining any sense of emotional stability.

These cravings, and the negative feelings associated with not fulfilling the cravings, known as withdrawal, are powerful forces driving the individual to use.

Once the brain is addicted, people face a substantial struggle when attempting to overcome the physical changes and cues that drive their behavior. They need evidence-based professional treatment, support, and strategies to help them overcome the brain changes of addictionâ''and self-control is only part of the equation for a successful recovery.